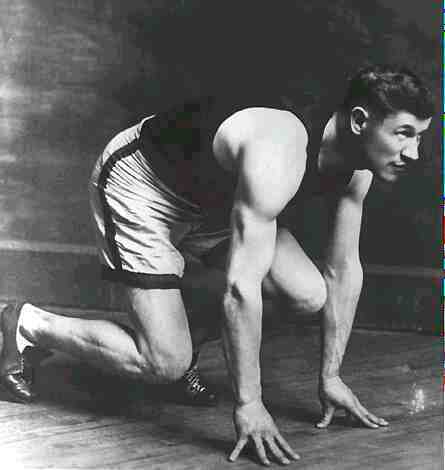 Friday, April 17, 1999 marked the campaign kick-off banquet sponsored by the Jim Thorpe Sports Hall of Fame in Jim Thorpe, PA.  For Pennsylvanians, resolutions were introduced by the state house and senate representatives supporting the campaign to recognize Jim Thorpe as the "Greatest Athlete of the Twentieth Century."  Present also were staff for members of the U.S. House of Representatives and U.S. Senator Rick Santorum - all showing up to present Grace Thorpe, daughter of the great athlete, with their respective resolutions of support.  The hall was the scene of a flurry of media and fans and a crescendo of excitement preceded the ceremonial entrance by Grace Thorpe with Senator Santorum.  After short speeches and acknowledgments, and a delicious meal, featured speakers gave testimony to the greatest athlete of the first half of the twentieth century.  I was honored to be able to give a slide presentation about the Carlisle Indian Industrial School, introducing its history and Jim Thorpe's contributions to that controversial institution.

Jim Thorpe bears a unique place in history and his legacy lives on.  Regardless of whether or not we are satisfied with the various millennium rankings touted by news and sports organizations, we can be proud of the legacy he leaves.  The most telling testament to that legacy is the eloquence with which his descendants continue his story.  This page is dedicated to Grace, Gail, Jack and Bill Thorpe, and their  relatives who continue to keep him alive in all of our hearts.  It's sometimes a good thing to be able to look critically at the history that was Carlisle, but it's always a good thing to experience the magic of what Jim Thorpe brought to Carlisle.   Thank you for your tireless efforts on behalf of your dad, and Carlisle.
With great respect,
Barbara Landis

My name is Stephen P. Thorpe.  I am a student at Haskell Indian Nations University.  I am of Shawnee, Sac & Fox, Wichita and Pawnee blood.  I am also a descendant of the great athlete James Francis Thorpe (1888-1953), also known as Jim.  Jim was my great uncle on my father's side.  He was also of Shawnee and Sac & Fox blood, and he was part Potawatomi.  When people hear my last name, usually the very next question is "Are you related to Jim?"  It seems that this would get to be annoying after a while but I never tire of telling them, "Yes, I sure am."
I am very proud of my heritage and the fact that I am related to arguably the best athlete of this century.  When I was growing up in and around practically the same area that Jim did in Oklahoma, I was bombarded by the same old questions from my grade school and junior high coaches.  Are you going to play football?  How about baseball?  Do you play basketball?  These questions never seemed to have much meaning to me, until I was old enough to fully realize who Jim really was.
When I was 10 or 11 years old, I can remember my father taking me hunting in the woods behind our house in Shawnee, Oklahoma.  Before we could leave the yard to get into the timber, we had to cross a four-strand barbed wire fence that ran the perimeter of the yard.  I can very distinctly remember my Dad telling me, "Your Uncle Jim used to walk right up to this fence and jump it like it was nothing.  He didn't even have to run!"  I think that was when I finally realized why I was being asked all the questions.
Because I am a "Thorpe" it seems as though people would expect me to be something I am not.  Now don't get me wrong.  I did play sports from grade school on through high school, and I was good.  I was even offered a scholarship to Highland Community College, but this all ended when I injured my knee badly enough to require surgery.  This hurt my pride more than anything, but I soon realized that athletics can do a lot for you, but not as much as an education can.  Now I am following in my Uncle Jim's footsteps by attending an all-Indian school, just as he did, but my path and my destination are different.
Most people know that Jim won the decathlon and pentathlon in the 1912 Summer Olympics in Stockholm, Sweden, but what a lot of people don't know is that he was voted the first president of the American Professional Football Association.  This was the forerunner of today's National Football League.  He was also named to both the college and professional football halls of fame.  My uncle set some very high standards for other Indian people and ordinary people as well.  That is why I will always be proud to say, "Yes, I am related to Jim."

"My Ponca Aunt Jewell actually saw Jim Thorpe come to Haskell Indian School (now University), where she was going to school, and saw him give a football kicking exhibition there. I was particularly interested in that old movie from maybe 1950 or 1951 or so. Our Osage chief for a long time, Fred Lookout, went to Carlisle and so did two of my Ponca aunt's older relatives - her Uncle Louis in the 1890's (some 1897 Indian Helper copies mention him as president of a debating society and vice president of the YMCA there), and her older brother Uncle Gus, who dropped out in 1914 as the scandals involving the football program and other matters nearly wrecked the place...
...Incidentally, when Aunt Jewell talks of that kicking exhibition Thorpe gave at Haskell in the late 1920's or early 1930's - when I suppose he was over forty - she says he stood on one goal line and kicked the ball on the fly over the other goal. "GOAL to GOAL!" she says, and still sounds like a teenager on the Titanic's decks."

"The Thorpes were also Sac and Fox and lived nearby as the farms were quarter- section allotments of the original Oklahoma Sac and Fox reservation.  They appear immediately following the Joneses on the 1900 OK census Pottowatomie Co. Vol. 15 ED 196 sheet 13 or 14.   There was James listed as being born in 1887.  The father is listed as being one-half Sac and Fox and the mother one-half Pottowatomie.  My mother said Jim was a twin and when his brother died their friends, including the Joneses, went to their place to mourn for the day.
The semi-pro baseball team (at least their uniforms were provided) which I am told that Jim Thorpe occasionally played for, which proved to be the pretext to take away the Olympic medals, was made up of several other Sac and Fox Indians.  They include Tom Jones, shortstop, and Levi Jones, 2nd base.  In this age it is hard to believe the obstacles Indians faced in getting fair treatment.  The Olympic Committee was forced to legitimize this racially motivated precedent by concocting a Byzantine rule system that denied US athletes support while foreign governments were free to support their athletes.   The medals eventually were returned when it was realized that baseball was not an Olympic sport.

On a lighter note, in responding to King Gustav's medal and pronouncement 'You Sir, are the greatest athlete in the world', Jim said, 'Thanks King'."

I recently looked up some information about Jim Thorpe and what an athlete he was!!!!!  I began looking at this information and thinking, hell - this guy could have put away Bruce Jenner and some of those other athletes touted as the "world's greatest athletes."  Thorpe was also in the first group of football players to be inducted into the National Football League's Hall of Fame.

"In our files, there is mention of the game between Carlisle and West Point where Ike (future president) was told to 'Stop that Indian!' . . .  and was promptly run over."